Skip to content
January 27, 2023
Chairman of the Nigerian Governors Forum and Governor of Ekiti State Kayode Fayemi has condoled the Government and people of Plateau State over the recent murder of over 100 people by terrorists in Kanam and Wase Local Government Areas of the State. 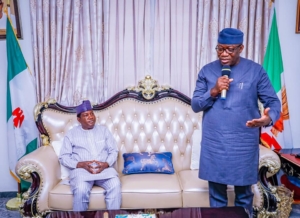 Governor Fayemi who was at the Government House Rayfield Jos on behalf of the Forum, condemned the murder of the innocent citizens by the terrorists, saying that this was another attempt to destroy the efforts put in by the Lalong Rescue Administration to consolidate peace and security in the State. 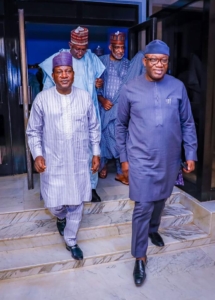 This was contained in a statement by Dr. Makut Simon Macham, Director of Press and Public Affairs to the Governor of Plateau State.
Fayemi said the Governors Forum is outraged over the killings and will continue to do everything possible to support Governor Lalong to overcome the situation and deal with those who are bent on causing chaos in Plateau State which is a natural destination of choice to many.
He announced a donation of 50 million naira by the Nigerian Governors Forum to assist in meeting the needs of victims and supporting those who are displaced. 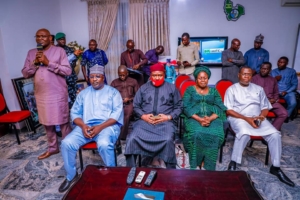 The NGF Chairman also condoled Governor Lalong over the death of Dr. Simon Harry, the Statistician General of the Federation who died recently and was buried on Friday.
Responding, Governor Lalong said he was delighted to receive the Chairman of the Governors Forum who has come on behalf of the other Governors to commiserate with the people and government of Plateau State. 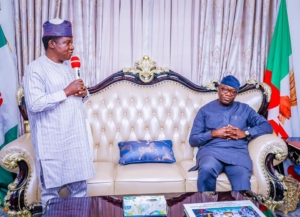 He said the State was devastated by the incident which was sheer criminality and another desperate attempt by merchants of crises to take the State back to the dark days.
Tags: 50 Million, Fayemi, Kanam, Lalong, Makut, NGF, Plateau, Wase