Some supporters of Peter Obi, former governor of Anambra and president hopeful, say they are making plans to raise N6 billion to support him.

The electoral law pegs the spending of presidential candidates at N5 billion.

His supporters on the platform of the mass movement of Peter Obi support network (POSN) said they will look into a donation of at least N1,000 from the “six million members” of the group in order to raise the said amount.

Speaking at an event in Abuja on Monday, Rufai Al-Siddiq, a sheikh and chairman of the occasion, said an opportunity should be given to Obi who is from the south-east and has the capacity. 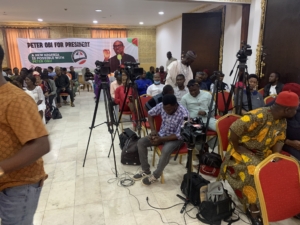 “Chance should be given to a candidate from the south-east. It will build good relationships throughout the country and bring unity. Peter Obi is the best person to be president in 2023.”

The cleric also said as running mate to Atiku Abubakar, presidential candidate of the Peoples Democratic Party (PDP) in 2019, Obi was also able to garner votes for the party at the time.

On his part, Marcel Ngogbehei, director of strategy for the group, said as governor of Anambra, Obi proved himself as a capable leader.

“We also said that whoever wants to be the president in 2023, he must be a man who has proven prudence in governance. Nigeria keeps borrowing which is bad. We want a president that will cut spending; We want responsible leadership with short and long term plans, focusing on citizens and not personal benefits. We have judged the contestant concerning their antecedents and Peter Obi has proved himself” he said.