It has always been a thing of concern in the African culture and especially in Nigeria when a lady doesn’t get married ‘on time’. Questions and statements like “when are you bringing your husband”? And ‘all your mates are getting married except you’ keeps flying about your ears. Sadly, this has driven so many young women into unhappy marriages.

Well, the same is not the case for the 46 year old veteran actor Rita Dominic who recently got wedded to the love of her life Fidelis Anosike a business man and a publisher of Daily Times newspaper. The actor who is getting married for the first time has stirred so much discuss. A motivational speaker and writer, Olemerezi Basil has on social media advised people against following the footstep of the newly wedded actor. He argued that there is no sweetness in marrying at the age of 46 and that  women have higher chances of giving birth to smart kids in their prime. The business man gave ladies a solution to getting married before 46 as he urged them to stop being selective. 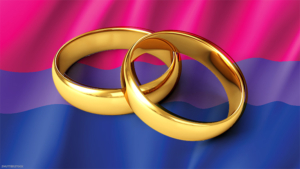 However, Ossai Ovie Success, Delta State Governor’s Ifeanyi Okowa’s aid has countered Basil Olemerezi’s advice to Nigerian youths not to marry late. Reacting to Basil’s counsel, Ossai gave air to the fact that there is absolutely nothing wrong in getting married at 46.

Regardless, it’s important that one thinks of the dangers involved in getting married late. Firstly, except you don’t want to have children, it definitely will be a lot of stress having a child after 40. Think about it, say you get married at 45, your first child will probably be four or five when you’re 50. How much time will you probably have to raise that child before you start loosing physical strength. Think about the stress associated with raising a child in this age and time, will you have enough emotional and psychological capacity to handle that?

Secondly, marriage is a lot about companionship. You’ll probably have navigated through life’s ups and downs without anyone besides you. How much time could you possibly have to enjoy your significant other’s company?

As important as marrying early can be, there is really no timeline for marriages. At this point, what everyone should be concerned about is if getting married ‘early or late’ will make them happy and fulfilled. At the end of the day, society is not going to stay in your marriage for you, you will. So, make sure it is worth your while.