He has continued to crack lame jokes and memes on Twitter. This time, he tweeted about his possible death. 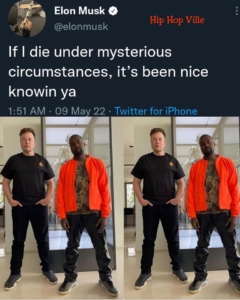 Musk, who seems to have been more active than usual with his wayward tweets after buying Twitter for $44 billion, on Sunday night, tweeted that he may die in “mysterious circumstances”.

This time, however, he received a reply from his mother, Maye Musk, who also has a fairly sizeable Twitter following.

Musk, one of the richest men in the world sometimes talks about smoking weed at Twitter’s board meeting, at other times he wants to buy Coco-Cola to put cocaine in the drink. In one of his latest tweets, he now joked about his mysterious death. Even his mother wasn’t amused. 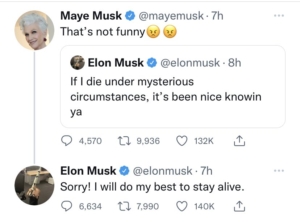 Earlier on Sunday night, billionaire Musk tweeted, “if I die under mysterious circumstances, it’s been nice knowin ya.”

Quoting the tweet, his mother said, “That’s not funny” and he apologized.