Skip to content
January 29, 2023
Bola Tinubu, the presidential candidate of the All Progressives Congress (APC), says the open lamentation of President Muhammadu Buhari on the ongoing industrial action by the Academic Staff Union of Universities has “opened doors” for him to urgently intervene.
Tinubu spoke while meeting with members of the National Association of Nigerian Students (NANS) in Osogbo, the Osun state capital.

“We initially thought of using back channels to engage the leadership of ASUU but now President Buhari has thrown down the Gauntlet. He has even shown his lamentation in the last 48 hours and as a result of that he had left the job open for our intervention,” the APC leader added.
Buhari had during the Sallah holidays in a statement issued by his media aide Garba Shehu, said, “Truly, enough is enough for keeping students at home.” 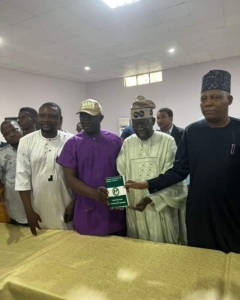 But ASUU president Emmanuel Osodeke snapped back the president retort, asking him to action the report of the committee he detailed to negotiate with them. Prof. Osodeke maintained that the Buhari regime was responsible for the prolonged strike.

Tinubu, who is seeking to win the favour of students promised that the lingering ASUU strike would soon be called off and asked the university students to prepare for their resumption back to class.
Tags: ASUU, Buhari, NANS, Shetima, Tinubu