The Troops of the 7 Guards Brigade which provides security for the Presidential Villa and the Federal Capital Territory (FCT) have been attacked by gunmen suspected to be terrorists.

They were ambushed in the late hours of Monday while on patrol along the Kubwa-Bwari Road in the nation’s capital.

A spokesperson for the Guards Brigade, Captain Godfrey Anebi Abakpa, confirmed the incident to Channels Television in a text on Tuesday. 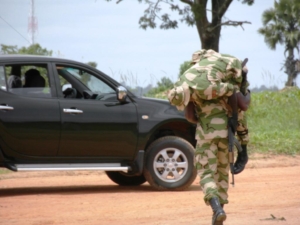 He, however, said the attack was successfully repelled by the troops.

Captain Abakpa said a few of the men who were wounded in action have been taken to a hospital where they were receiving treatment.