The Nigeria Security and Civil Defence Corps has presented a cheque of N2.8 million to the family of Inspector of Corps, Ilyasu Abraham, who was killed by terrorists during the attack on Kuje medium custodial centre on July 5.

Abraham was the only security personnel killed during the attack, while six others were wounded. 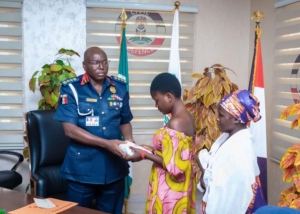 The Commandant-General of the NSCDC, Dr Ahmed Audi made the presentation of the cheque at the headquarters of the Corps in Abuja.

According to a statement from the Corps spokesman, Olusola Odumosu, a cheque of N2.5m and the sum of N300,000 cash was presented to Mrs. Elizabeth Abraham and daughter, Abimiku Blessing at the Corps National Headquarters in Abuja.