Sanwo-Olu commissioned the Orochiri-Worukwo flyover in Port Harcourt yesterday as he was the guest of Governor Wike. 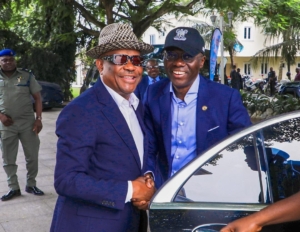 The bridge which is part of the infrastructural investment in urban renewal of the Garden City will be a physical upgrade of the state capital.

Sanwo-Olu in a tweet commended Wike by saying “Orochiri-Worukwo Bridge constructed by the Wike-led administration will ease the movement of commuters within Port Harcourt and environs and improve the productivity of the people”.
Tags: APC, Flyover, Lagos, PDP, Rivers, Sanwo Olu, Wike