A Rivers state owned aircraft; the legacy 600, allegedly abandoned in Germany under unclear circumstance by the preceding administration has been recovered and flown back to Rivers. 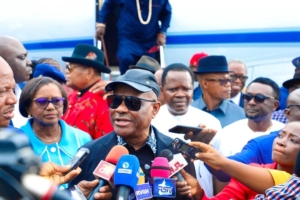 At the reception by the Rivers State government at the Port Harcourt International Airport to receive the state Legacy 600 Aircraft that was said to be missing since 2012, Governor Wike restated that it took diligent intelligence gathering by his administration to discover the asset, alleging how the administration of his predecessor and former Transportation Minister, Rotimi Amaechi, flew the aircraft to Germany with no record of the development made available to his administration.

He said the State government will decide how the asset will be used in furtherance of the State’s development.