As Akwa Ibom State marks its 35th anniversary as a state, the state governor Udom Emmanuel in a series of project is set to commission the new Eket Sports Complex. 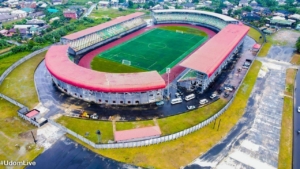 The Governor in a statement on his Facebook handle said “I remember the day our darling Akwa United Football Club won the Aiteo/ Federation Cup in 2017 and I had observed that their free flowing game was hampered because the Agege Stadium in Lagos had artificial turf quite different from the natural grass at their home ground. This 18000- Seater modern sports complex in Eket, is part of the promises I made, that I will provide the State with a Stadium that has the finest co-polymer polypropylene Astro Turf.”

Built from the scratch by Governor Udom Emmanuel to engender sports developments at the grassroots, the stadium will be formally unveiled today, Friday September 30th, at 3pm.

It will be followed by a novelty match between Akwa United and Katsina United by 4pm.