Skip to content
November 27, 2022
The Vice President, Professor Yemi Osinbajo, SAN, has congratulated and charged the newest graduates of the Nigerian Defence Academy (NDA) to be warrior-scholars that will confront enemies of the state with an arsenal of unconventional skills, unorthodox strategies and critical thinking.

Prof. Osinbajo stated this in Kaduna at the 32nd Convocation Ceremony and the Graduation of 69 Regular Course Cadets and Postgraduate students of the Nigerian Defence Academy (NDA).
He said the new generation of officers will need to define their cause and fight their battles as they are operating in this new environment with peculiar challenges.

“In strategic national security terms, you will be operating in a new age. While your challenges are new, it is also true that every generation must define its cause and fight its own battles.”
This was contained in a statement made public by the Senior Special Assistant to the President on Media & Publicity, Laolu Akande.

The VP also commended the leadership of the academy for the innovation in the curriculum of the institution, urging the “warrior-scholars (graduating cadets) to devote themselves as their forebears have done to preserving the unity of our country.”

According to him, “the Armed Forces of Nigeria have long been considered one of the most unified and unifying of our institutions. We must not allow the rhetoric and actions of those determined to use ethnicity and religion to advance their often narrow and selfish interests to affect our belief in the righteousness, strength, and prosperity for all that a large diverse and united nation offers to all its peoples.” 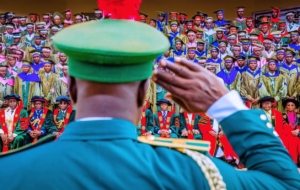 Prof. Osinbajo was the Special Guest of Honour at the Convocation Ceremony held at the Permanent Site of the Nigerian Defence Academy, Kaduna. He was accompanied by the Kaduna State Governor Mallam Nasir El-Rufai who received him at the airport, alongside Maj.-Gen. Bashir Magashi (rtd) and some top military officers.
Tags: Cadets, El-rufai, Kaduna, NDA, Osinbajo