Skip to content
December 6, 2022
Governor Simon Lalong of Plateau has charged the newly installed Mishkaham Mwaghavul, Da John Hirse, to take security seriously and work with his people to support government to maintain law and order.
Lalong gave the charge on Saturday at the coronation and presentation of staff office of the new paramount ruler in Mangu, Mangu Local Government of Plateau. 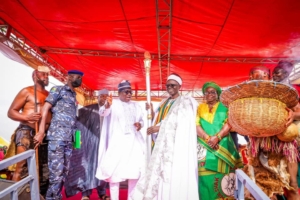 The governor urged the new ruler to adopt inclusiveness in his leadership and discharge his duties diligently in line with the traditions of the Mwaghavul people.
Lalong said that he had been briefed by the security agencies and had equally directed them to take the fight to the criminals who must be flushed out of the state at all costs. The governor stated that his administration would hold traditional institutions in high esteem because of its role to development, especially at the grassroots. Hirse, in his acceptance speech, pledged himself to the service of his people. Hirse, a retired federal permanent secretary stated that he would strengthen the administrative capacity of his district offices, reposition the Mwaghavul Development Association and its organs for optimal socioeconomic gains.
Tags: John Hirse, Mangu LGA, Mishkaham, Mwaghavul, Plateau State, Simon Lalong